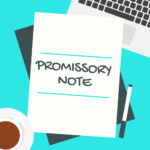 A Promissory Note, sometimes which is called as Pro-note, is a central document in dealing with the bank advances (loan). It is a prima facie evidence that the person who signed it actually borrowed money unless the contrary is proved. The Promissory Note is valid for 3 years from the date of execution which can be varied on demand.

Hence, A promissory note is a financial instrument that contains a written promise where one party (the note issuer, or maker) promise to pay another party (the note’s payee) a certain sum of money, either on demand or at a specified future date. This note contains all the necessary terms pertaining to the indebtedness such as principal amount, interest rate, maturity date, date and place of issuance, and issuer’s signature.

Section 4 of the Negotiable Instrument Act defines Promissory Note as

” an instrument in writing containing an unconditional undertaking, signed by the maker, to pay a certain sum of money only to, or to the order of a certain person, or to the bearer of the instrument.”

The following three kinds of promissory notes are normally obtained by banks:

This type of promissory note is applicable where the borrower is either a sole proprietor of a firm or borrower in his personal name.

This type of Promissory note is obtained when the guarantor is either made the principal debtor or he is shown as the payee of the Promissory Note.

This type of Promissory Note is obtained when the loan is granted to the borrowers jointly or where it is considered expedient to make the officials severally liable. For Example, In the case of Limited Companies, it is essentials that the directors or managing agents of the company should be made personally liable to bring home to them their personal liability in order to introduce a further element of security to the bank’s advance.