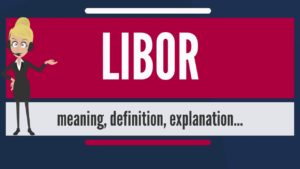 LIBOR stands for London Interbank Offered Rate which is considered as one of the most important interest rates in finance. This is a benchmark rate that is charged by some of the world’s leading banks to lend each other for short-term loans. Its also referred as Inter-continental Exchange London Inter-bank Offered Rate (ICE LIBOR). IBA which is known as ICE Benchmark Administration (IBA) administer the LIBOR. This is based on five currencies; the U.S.dollar (USD), euro (EUR), Pound Sterling (GBP), Japanese Yen (JPY), and Swiss franc (CHF). Seven different maturities: Overnight, one week, and 1,2,3,6 and 12 months are served by LIBOR. There are 35 different rates in each business day and most commonly quoted rate is the 3 months U.S. dollar rate.

How is LIBOR set?

This is the system of the bank to lend money from each other. Every day a group of leading banks submits the interest rates at which they are willing to lend to other finance houses. this group of banks suggests rates in 10 currencies covering 15 different lengths of the loan, ranging from overnight to 12 months.

Three-month dollar Libor is the most important rate. The interest rates submitted would pay other banks to borrow the dollar for three months if they borrowed money on the day the rate is being set. Then the average rate is calculated.

There are 16 Banks under the British Bank Association (BBA). Evertday, before 11 am London time, BBA asks these banks for the rate at which they are ready to lend in interbank market. These rates are for different time period. As Libor is for short term, rates are usually for 30 days, 90 days, 120 days, 180 days, 270 days etc. It could be after receiving the quote from each of the 16 banks the rates are arranged in a descending order. Top 4 and bottom 4 rates are removed from the list. An average of rest of the 8 rates is calculated, which serves as LIBOR.

Libor rate may be manipulated. As the rates are submitted is estimated, not for actual transactions, the banks could submit false figures. It is alleged that traders at several banks may influence to submit the final average rate which may higher or lower than their actual estimate.