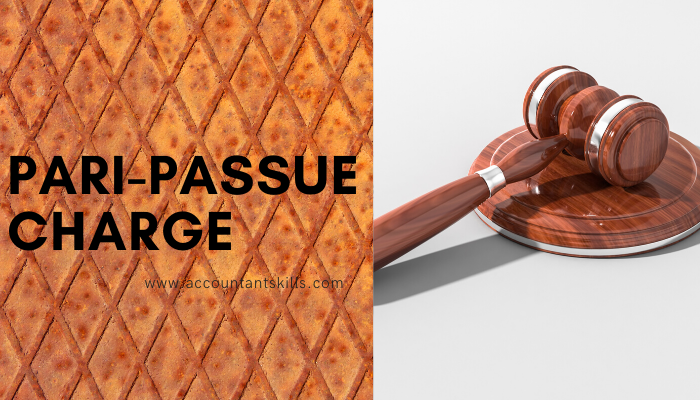 What is Pari-Passu Charge?

Pari – Passu is a Latin expression. Literally means “with an equal footing” or “ with an equal step.” It is sometimes translated as “ ranking equally.” Hence, Pari-passu charges mean charge holders have equivalent rights over the borrower assets on which pari-passu charge is created.

Pari-passu occurs during bankruptcy proceedings when a verdict is reached, all creditors can be regarded equally, and will be repaid at the same time and at the same fractional amount as all other creditors. Treating all parties the same means they are pari passu.

“When borrower company goes into dissolution, the charged assets will be distributed in proportion to the lender’s respective holdings.”

Large borrowers are financed by multiple banks in the consortium or under joint lending arrangements (JLA). Banks that participate in the Joint Lending Program takes the share of the certain percentage of the total amount of finance under uniforms terms and conditions including interest.

Suppose, XYZ Limited Company requires capital of USD 50 million to invest in its new project. For this funding, XYZ limited contacted with three venture capital firms. These three firms agreed to invest in the following manner:

During the final negotiation, the management of the A Company is provided term sheets to sign which state that the equity provided by firm A will be pari-passu to all other series of equity. The purpose of using this term sheet to confirm that Firm A will have the same rights and privileges as other Firm B and Firm C.

The term Pari-passu is used to protect the investor. This term restricts the borrower to create a class of senior or preferred parties while distributing resources in the event of insolvency. The new lenders prefer the term pari-passu in order to minimize risks and secure their investments.

Pari-passu charge arisen when more than one lender has a charge like a mortgage on the same property though created at different times, if the lenders agree among themselves, their charge/mortgage will rank equal in enforcement. This term is used to describe a similar ranking of securities or lenders when a new issue of shares is made, they could be said to rank pari passu. A common agreement between joint lenders is a pari passu clause under which, in the event of a shortfall, they agree to share equally whatever is available.